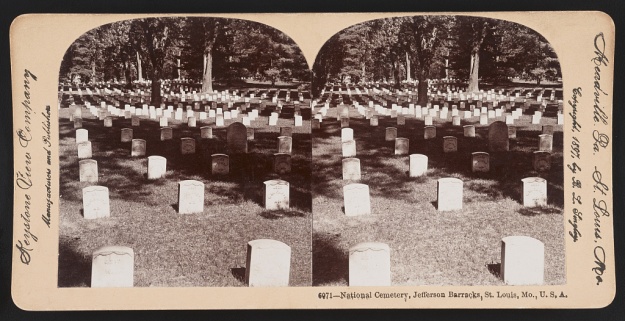 Jefferson Barracks National Cemetery around 1897. Courtesy of the Library of Congress.

On May 30, 1870, several thousand Civil War veterans and civilians gathered at Jefferson Barracks National Cemetery to lay flags at their former comrades’ graves. With over 10,000 graves to decorate, Major General John Pope (commander of the Department of the Missouri) suspended “all business at department headquarters to day; also at the arsenal and at Jefferson Barracks” so all officers and soldiers could participate in the commemorative activities. [1] It was just the second anniversary of the so-called “Memorial – or Decoration – Day,” and each veteran knew the importance of the moment. END_OF_DOCUMENT_TOKEN_TO_BE_REPLACED 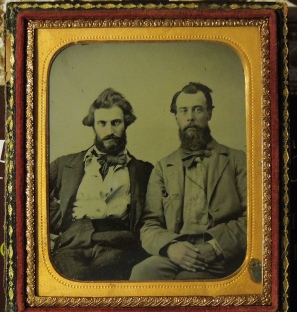 In early February 1862, pro-Union Missourians could take a sigh of relief. Just months before, the war in Missouri had shifted from Southern victory to retreat. Though the future looked promising for the Unionists, there was still uncertainty. Is the Missouri State Guard out of Missouri for good? Will the state be invaded? What will happen if the Southerners are victorious? Can Federal and State troops protect civilians as promised?

On February 5, The Macon Gazette – a pro-Union paper in Macon County – published an article from nearby Knox County about a group of deserters from Price’s Missouri State Guard who were captured by local militia. For the Unionists in the area, to hear signs of desertion and exhaustion must have been reassuring.

For us historians, it reveals an abundance of information about the Guard’s physical condition, equipment, armament, and morale. What is also quite interesting is the fact that they felt “deceived” by Price and Jackson. With the Guard merging into the Confederate Army of the West, it frustrated many of Price’s men. There were others who felt that the Confederate cause was not what they were fighting for; instead, they were fighting to protect their homes, hearths, and state. END_OF_DOCUMENT_TOKEN_TO_BE_REPLACED 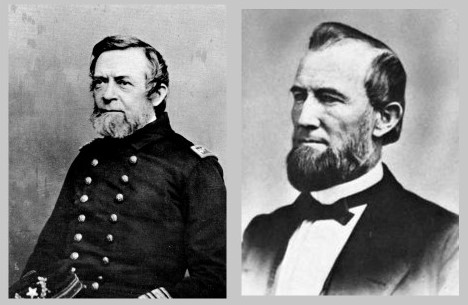 Rear Admiral Andrew Hull Foote and James B. Eads. Courtesy of Wikimedia and the Library of Congress.

On September 9, 1862, United States Navy Flag Officer (later, rear admiral) Andrew Hull Foote wrote a letter to St. Louis engineer James Buchanan Eads, who gave the Foote family a basket of grapes as a gift. As many already know, James B. Eads and his Marine Iron Works in Carondelet, Missouri, constructed the iron gun boats for the Union war effort on the Mississippi River. Foote commanded the Western Gunboat Flotilla, the main brown-water naval force that utilized Eads’ gunboats. This one letter between Foote and Eads gives a glimpse into the unique relationship between two of the most influential people for the war on the Mississippi. END_OF_DOCUMENT_TOKEN_TO_BE_REPLACED

In the years prior to the outbreak of the Civil War, well over two-hundred future field commanders in the war were stationed in Missouri. These soldiers included Robert E. Lee, Ulysses Grant, James Longstreet, William T. Sherman, Braxton Bragg, and many others. They were trained and drilled on the parade ground of Jefferson Barracks Military Post located only a few miles south of St. Louis along the Mississippi River. 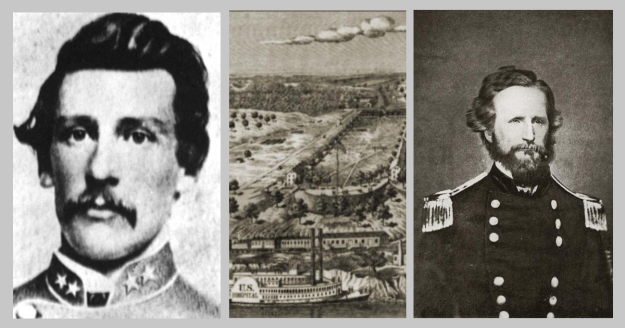 Willie Lee is shown on the far left with a war-time image of Jefferson Barracks and Nathaniel Lyon on the right. Courtesy of the Reeves Family, Civil War Scholars, Missouri Civil War Museum, and The State Historical Society of Missouri.

Though many – like Ulysses Grant and J.E.B. Stuart – largely had positive experiences serving near one of the largest cities in the United States, some soldiers’ services at Jefferson Barracks were blotted with challenges. One of these soldiers was Lieutenant William “Willie” Fitzhugh Lee. END_OF_DOCUMENT_TOKEN_TO_BE_REPLACED

Iowa sketch artist Alexander Simplot was to the Trans-Mississippi Theater as Alfred Waud was to the East. With pencil and paper in hand and the pseudonym “A.S. Leclerc,” Simplot was tasked by Harper’s Weekly and the New York Illustrated News to visually document the Civil War in action from 1861 to 1863, particularly focusing on the war along and west of the Mississippi River. Interestingly enough, he was assigned to the Army of the West in the summer and early fall of 1861, and sketched parts of Brigadier General Nathaniel Lyon’s campaign through Missouri. Simplot also sketched in St. Louis soon after, where he drew scenes of naval engineer James Eads’ gunboats and the Department of the West. 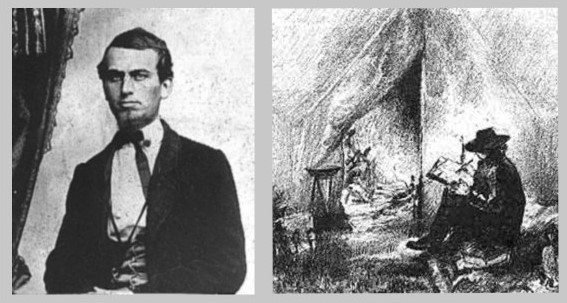 Alexander Simplot’s portrait on the left, with a drawing made of a Civil War sketch artist in action. Courtesy of FindaGrave and George Mason University.

A native of Dubuque, Iowa, Simplot was born in 1837 into one of the most wealthy families of the region. Though looked down upon by his successful father, he developed a love of art at an early age. When civil war broke out in April 1861, Simplot had already graduated from Union College in New York and was working as a teacher in his hometown. A demand for sketch artists by newspapers encouraged him to sketch local scenes of the war. After visually documenting the mobilization of Iowa troops in Dubuque, Simplot sent his work to Harper’s Weekly, who immediately expressed interest in further employing him as a special artist. He had found his calling. END_OF_DOCUMENT_TOKEN_TO_BE_REPLACED

One of my favorite things about the Spring and Summer months is to get out and explore battlefields, museums, and historic sites. I have compiled a list of upcoming events (lectures and tours) that are about Missouri in the Civil War. END_OF_DOCUMENT_TOKEN_TO_BE_REPLACED

There is no doubt that this letter is one of the most heartbreaking ones I have ever read from the Civil War era. On October 17 and 18, 1862, from the cells of the Palmyra Prison, Captain Thomas A. Sidner of the First Northeast Missouri Cavalry penned a letter to his friends and family, notifying them of his pending execution. In command of the District of Northeast Missouri, Col. John McNeil sentenced to death ten random Confederate prisoners from the Palmyra Prison in retaliation for the supposed murder of a local Union sympathizer. With no ties to the murder, Sidner was told that he was to be executed the next day for a crime he was not guilty of. Later known as the Palmyra Massacre, this act became one of the most infamous war crimes of the entire Civil War.

Col. John McNeil is on the left, with the District of Northeast Missouri’s Provost Marshal Office in the center and Col. Joseph Porter on the right. Courtesy of the Library of Congress, Restoration Movement, and FindaGrave.

END_OF_DOCUMENT_TOKEN_TO_BE_REPLACED

At the corner of 8th and Gratiot, the McDowell Medical College was transformed into St. Louis’ most notorious prisons for Confederate soldiers and secessionist civilians.

Just prior to the outbreak of war, the college was owned and operated by the macabre Dr. Joseph McDowell, who gained a reputation for digging out corpses from local cemeteries for cadaver experiments. Nonetheless, he proved himself to be one of the most respected and knowledgeable medical professionals in the country. Being a secessionist, McDowell left St. Louis and was named Surgeon General for the western Confederate armies. Like many others, though, his property was confiscated by Union authorities in and utilized for the Union war effort there. END_OF_DOCUMENT_TOKEN_TO_BE_REPLACED 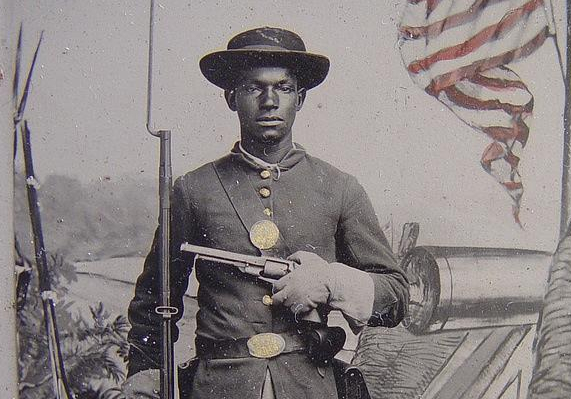 One of the most recognizable African-American soldiers of the Civil War, this young soldier has represented the nearly-200,000 USCTs who served in the Union armies. Standing in front of the famous “Benton Barracks backdrop,” he has also been the face of former Trans-Mississippi slaves who risked their lives to fight for freedom. Around 8,000 of them were from Missouri. Unfortunately, he has remained anonymous to historians for over 150 years. END_OF_DOCUMENT_TOKEN_TO_BE_REPLACED

“Our men were generally armed with the old Springfield rifle, while the Confederates had in many instances only shotguns. Most of our wounded were disabled by buckshot or buck-and-ball. Some of the Confederates used old double-barreled guns,” remembered Major John Halderman of the First Kansas Infantry. He was not writing about just any Trans-Mississippi Confederate troops. In fact, he was recalling the troops of the Missouri State Guard at Wilson’s Creek, who went into battle there with a hodgepodge of firearms. [1] 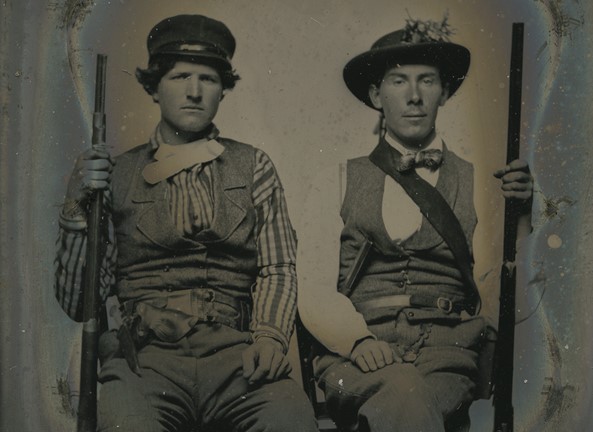 Two members of the Moniteau County Rangers, Missouri State Guard. The soldier on the left is shown with most likely an 1841 Mississippi Rifle, while the soldier on the right is armed with a long rifle. Courtesy of Wilson’s Creek National Battlefield.

Due to the speed of Brigadier General Nathaniel Lyon’s movement at the start of the campaign, Governor Claiborne Jackson and the state legislature was unable to properly supply the newly-formed Missouri State Guard was uniforms or weapons. The units of the Guard were either former militia or they were newly-formed. Roughly 30% of the Guard was properly uniformed.[2] END_OF_DOCUMENT_TOKEN_TO_BE_REPLACED