A blog dedicated to telling the story of Missourians during the American Civil War Era.

Just last week was the 158th anniversary of the Battle of Wilson’s Creek – the first major battle fought west of the Mississippi River. With approximately 2,500 wounded, killed, and missing Federal and Southern soldiers, the battle itself undoubtedly set the stage for Union occupation and ultimate victory in Missouri. During the battle itself, the climactic fights took place on what was later named “Bloody Hill,” a plateau marked by deep ravines and thick brush. Images of Bloody Hill I took on my visit show the heavy brush and uneven terrain (see below). 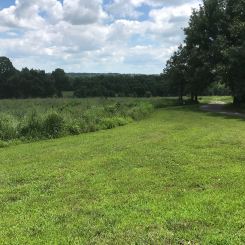 During every Southern assault and Federal movement on that hill, units had difficulty maintaining alignment and structure between the ravines. After visiting the battlefield myself in July, I walked along the trails on Bloody Hill and wondered how the terrain looked on a topographical map and elevation profile.

I visited the USGS National Map viewer and pulled up the USGS Imagery Topo map to look at the hill’s elevation and terrain.

Based on the topographical map, Bloody Hill’s size and plateau-like features can be clearly seen. Also, you can see how much of Bloody Hill has not been saved yet by preservation groups and the National Park Service. Only the eastern-half of the hill has been Federally preserved.

With the use of USGS, I took a sample of the advance from roughly the center of the Southern lines. Over the course of the battle, the Missouri State Guard launched attacks roughly 1/3 of a mile to the top of the hill. In that distance, the Southern troops had to advance 58 feet in elevation.  From the elevation profile shown below, you can also clearly see the ravines.

Another profile from the perspective of the Southern troops is following McBride’s advance on the first major Southern assault. As you can see, his division’s advance was much steeper. in the same distance, McBride’s State Guardsmen had to climb over 80 feet in elevation.

A final analysis I wanted to do using this software was of the Federal positions on the hill. From reading quite heavily on the battle and the initial Federal movements on Bloody Hill, both the First Missouri and First Kansas had significant difficulty moving down, due to the uneven terrain. Well, following some of these positions along Bloody Hill reveal just how uneven it really was. Over just .6 miles, the terrain itself rolled up and down. It is no wonder why the Federals and Southern troops had trouble maintaining order in the ranks during the battle itself.

Unlike Gettysburg, where you can follow the path of Confederate troops in the Pickett-Trimble-Pettigrew assault on July 3, 1863, Wilson’s Creek does not have a path you can generally follow the assaults up Bloody Hill. I hope this elevation study of Bloody Hill can provide a bit of insight into the difficult terrain during the battle.

N.C. Wyeth’s painting of the Battle of Westport. Image from Wikimedia.