Hardtack, salt pork, cornmeal, and coffee are the four foods we associate with the average Civil War soldier’s ration. Much of what we learned about the rations comes from Hardtack and Coffee, the famous book written by John Billings of the Army of the Potomac. Though an excellent primary source into the life of a Union soldier, it is in the eyes of a soldier who fought in the best-equipped and organized Federal army of the war. In the Trans-Mississippi, particularly in Missouri, the life of a soldier was unique – especially in regard to what they ate and drank.

During the 1861 Missouri Campaign, which was decisively fast-paced, rations were especially difficult, particularly for the Federals of the Army of the West. The 200-mile-long supply line from St. Louis to Springfield was particularly rough. The first 100 miles between St. Louis and Rolla was by train via the Southwestern Branch of the Pacific Railroad; the next journey from Rolla to Springfield (the base of the Army of the West in southwestern Missouri) was by the dirt Wire Road. It took over a week to receive supplies from St. Louis. A soldier in the First Iowa Infantry described the ration situation perfectly:

Nothing all day but mush and coffee. We hear more of the battles at Manassas Gap and Bull Run. Here we are, camped on a flat prairie, and the miserable rations have given everyone the diarrhea.

While operating against insurgents and guerrilla troops in northern Missouri in December 1861, members of the Tenth Missouri Infantry struggled to get enough food. For units (especially small ones) operating in enemy territory, their lines of supply and communication – including their precious rations – were vulnerable to being cut by enemy cavalry. [For information on the Union soldiers’ ration, check out the video below]

With threatened lines of supply, the Tenth Missouri struggled to get their rations. Lieutenant Marcus Frost recalled that on December 27, 1861, the men “found our provisions were about gone, and none to be had before we got to Mexico [Missouri], then two days march off. On examination, it was found we had about one hard cracker to the man, which was distributed. This, with some fresh beef, (very fresh for we had no salt,) was all we had to eat.” The men had realized guerrillas cut their line of supply along the North Missouri Railroad, which connected them to St. Louis.

For Union troops on patrol in guerrilla territory, such as north-central Missouri, they had to forage for food, which included taking foodstuffs from local civilians and businesses. “We had eaten nothing for two days past but fresh beef, with a little coffee to wash it down” Frost wrote about their foraging expedition in Concord, “As soon as they got their knapsacks off, they were off, and I doubt if there was a man in the Tenth Regiment but what was supplied with chickens, geese, turkies [sic], pork, honey, or something of the kind … we had chicken pot-pie, minus the pie, chicken fricassee, baked, fried, stewed, boiled, roasted, toasted, broiled, together with plenty of hoe-cake, coffee, and all the little etceteras.” The food was plentiful in Concord, especially with honey. Frost shared that on January 12, 1862, a detail of the men came back to camp “loaded down with honey. This was divided among the boys, and many a “sweet tooth” was filled … the sick list next morning of the companies who shared in this feast, was largely increased.”

Two contemporary sketches of foraging during the war. Courtesy of the National Park Service.

In December 1861, orders were issued by Brigadier General John Schofield, limiting the rations for the Missouri State Militia:

V. Post commissaries will not issue the full rations prescribed by the United States Army Regulations, but a sufficiency of good, wholesome food, such as meat, flour or corn meal, and potatoes, which can be purchased near the post at moderate prices. The men are to be supplied, after being enrolled and until mustered into service by companies, with the necessary amount of food for their health and comfort at the least possible expense to the State; after being mustered, the United States will furnish full rations.

Major General Samuel Curtis, in October 1862, continued Schofield’s orders, saying, “I have ordered full rations when they seem to need and deserve them.”

For Federal Missourians, by late 1861 and into 1862, the Western Sanitary Commission (WSC) made it a priority to not only care for the wounded in the west and Trans-Mississippi but to also supply food. William Greenleaf Eliot and James Yeatman – both St. Louis philanthropists – created the WSC as a rival to the U.S. Sanitary Commission (USSC), which put its focus almost entirely in the east. To funnel resources to the west was near impossible for the USSC. In his personal papers, Eliot made sure that one of the goals of the WSC was to, provide “proper means for the preserv[atio]n of health & the prevention of sickness, by proper man[a]g[emen]t of the culinary department in the camps, by systems of drainage, and whatever other means practicable.” In 1864, a history of the WSC was published for the Mississippi Valley Sanitary Fair, full of insight into the struggles of Federal troops to get a wholesome meal:

In the army ration, there is a deficiency of vegetable food. The amount of potatoes, for instance, to each ration, is not one-quarter of what would be a sufficient supply for a well man at home … Such a want of vegetable diet soon engenders scurvy and other diseases that incapacitate the men for duty, and destroy life. To meet this want, the Western Sanitary Commission has forwarded thousands of cans of tomatoes, and kegs of pickles, to the army.

The WSC’s assistance in giving Federal troops in Missouri regular healthy meals is shown in this published list of all the units that received assistance: 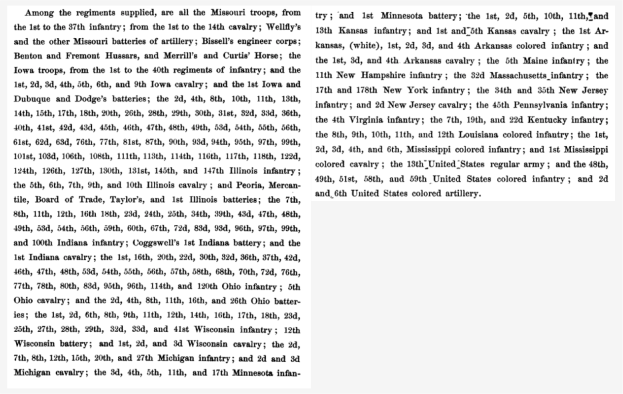 On the other side, Missouri State Guard troops in 1861 mainly relied upon foraging and hunting. While encamped at Cowskin Prairie in the summer of 1861, Pvt. Peter D. Lane recalled how he and his pards were tired of their diet of “beef and badly cleaned wheat.” To vary their diets, Guardsmen would hunt, fish, forage, and were sometimes lucky enough to have “the Seneca Indians who lived near bye, bringing in butter, eggs, apples, and such articles of food” for the men to buy. Being in the southwestern corner of the state by the Indian Territory border, Cowskin Prairie was open prairie but did have natural water features apt for swimming, bathing, and fishing. Lane wrote in his late-war memoir that “sometimes we would go to the river fishing, but seldom succeeded in obtaining any of the finny tribe for our trouble … we could see the beautiful perch gliding through the chrystal [sic] water even when four or five feet under the water.”

A necessary supply for soldiers, here are two images showing soldiers cooking and fishing. Courtesy of the Library of Congress.

By mid- to late-1862, after Lane and many members of the Missouri State Guard enlisted in the Confederate service, food was so scarce they could no longer feed their horses. “We now had to sell or almost give away our horses, saddles, bridles, etcetra [sic] and we were the most constrained to do this since we could scarcely obtain food for them until we could find a buyer … thus were we treated, & is only one specimen out of hundreds which soldiers when under the command of bigoted & cruel tyrants, have to undergo.” Much of the supply and ration issues culminated as the Confederates stretched out supply lines pushing through Arkansas. Lane also wrote about the Confederate encampment at Elm Springs in Arkansas, where the commissaries “did not bring our beef for supper until an hour or two in the night, and being required to rest or at least be perfectly quiet after 9 o’clock P.M. we often could not get our supper before this time.” Reading through Lane’s memoir, it seems that the Missouri and Arkansas Confederate troops’ condition even in 1862 were similar to many late-war Confederate armies.

Another Missouri Confederate – Charles H. Hance – who served in northern Missouri under Colonel Joseph Porter, wrote about the lack of food in 1862. “The command was broken up to seek, in companies, forage for the horses and food for the men. I remember how very hungry I was, having then gone without food for more than twenty hours,” recalled Hance. Just before the Battle of Moore’s Mill in the summer of 1862, the men of Porter’s command “had just taken some flour and was mixing it with water that I had obtained from the little branch, where we had pitched our camp, when our pickets came rushing in, reporting the enemy near. Without a moment’s notice, the dough and camp were abandoned.” After the battle, two young women “washed the blood and battle stains from my face and hands, and gave me some delicious chicken broth, the first food I had had for several days.”

As expected, Missouri’s troops, both Federal and Southern/Confederate, had difficulty obtaining and maintaining rations during the war. Long lines of supplies and communication were continuously a problem. Federal troops struggled to keep lines of communication and supply protected to receive their rations. Like troops across all theaters of the war, if rations were not obtained, they would scavenge the countryside for foodstuffs. Confederates had similar experiences. As early as 1862, veterans recalled how hungry they were and how rare they received rations. For many Southern soldiers, hunting and foraging were effective ways to obtain food in camp and on campaign. Though the food they ate in Arkansas and Missouri was similar to those eaten in the east, the experience of obtaining food was unique to this region, as seen throughout this article. Food was an essential item for survival, morale, and for both mental and physical endurance. It helped shape and define a soldier’s experience.

Forman, J.G. The Western Sanitary Commission: A Sketch of Its Origin, History, Labors for the Sick and Wounded of the Western Armies, and Aid Given to Freedmen and Union Refugees, With Incidents of Hospital Life. St. Louis, MO: R.P. Studley & Co., 1864.

Hance, C.H. Reminiscences of One Who Suffered in the Lost Cause. Los Angeles: Kingsley, Mason, & Collins, Co., 1915.