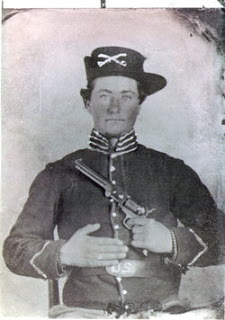 Throughout the war in Missouri, both Federal and State cavalry units were vital to protecting and securing lines of communication and supply routes. Unlike in many other theaters of the war, Missouri cavalrymen had to defend these lifelines and maintain law and order. For Pvt. Samuel Hamilton Flint, a member of both the 7th Provisional Enrolled Missouri Militia and the 15th Missouri Cavalry, was representative of many other Missouri men who enlisted in Union units; they were literally defending their own homes and families from the enemy.

Born and raised in the Ozark Highlands of Johnson Township, Polk County, Missouri in 1841, Flint was the oldest of four children of two Lexington, Virginia natives. Sometime before 1840, Ezekial and Mary Jane settled in southwest Missouri, similar to many other settlers from the upper South. Missouri’s vast rivers, fertile land, rich mineral deposits, ability to trade, no restrictions on slavery according the Missouri Compromise, and the capacity to invest in new land encouraged thousands to settle in the former Louisiana Territory. Additionally, the Old Wire Road led people from St. Louis to Springfield and beyond to Fort Smith, Arkansas. Like other settlers, the Flint family invested in their family farm.

When the Civil War broke out in April 1861, a family, such as the Flints, had reason to be concerned of their spot. For one, the Flint family was Unionist, much like other families in the southwest. The fact that Springfield to the south of Polk County was a strategic spot for concentrating armies and Confederate territory lay just miles to the south, families like the Flints had reason to worry. Additionally, irregular warfare that had lingered on since Bleeding Kansas seemed to penetrate into other areas of Missouri, including the southern part of the state.The love of Union and need to protect their homes and families encouraged many young men to join state units that were built just for that.

On November 1, 1863, at the age of 22, Samuel H. Flint and his brother William enlisted at Mount Vernon, Missouri into the 7th Provisional Enrolled Missouri Militia (P.E.M.M.) for twenty months under the command of General John Schofield. These militias were originally formed by the proxy Unionist government put into power in Missouri in 1861 to stop insurrection, further rebellion, and maintain the law. Unlike the previous Enrolled Missouri Militia (E.M.M.), the P.E.M.M. was full time in order to quell distractions from home and work that hurt the original E.M.M. that was part time. That also allowed them to receive Federal pensions after the war. The 7th was one of eleven of these units. Flint and his fellow militiamen were acting as law enforcement, which is similar to the role of U.S. troops in Iraq and Afghanistan. 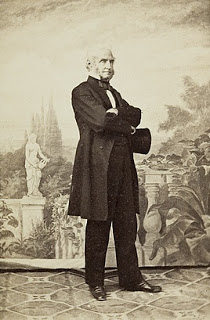 Once the unit disbanded after political conflict with Governor Hamilton Gamble, Flint, along with William, enlisted in the 15th Missouri Cavalry, Company D in Springfield on July 3, 1864. Samuel Flint likely had no combat experience in the P.E.M.M., which would drastically change with his service in the 15th Missouri Cavalry. From September until late October of 1864, the unit was engaged in some of the hardest fighting of Sterling Price’s Missouri Campaign: Big Blue, Marmiton, Mine Creek, Marias des Cygnes, and Newtonia. Miraculously, both were discharged in July 1865 without a scratch.

A Union veteran’s depiction of the battle of Mine Creek, one of many cavalry engagements Flint fought in. Courtesy of the Kansas Historical Society.

After the war, in 1867, Samuel married Francis E. Hudson of Rondo, Missouri. They were married in her parents’ home with her uncle leading the service. The couple owned a farm near Humansville in Polk County. Throughout their sixty-year marriage, Samuel and Francis had eight children, including one who died in infancy. Because his name is not listed in the Grand Army of the Republic of Missouri’s death roll index, it is assumed that Samuel was not an active member of the local Lt. S.A.M. George Post #232 at Humansville. In 1924, Frances passed away at the age of 76. Samuel lived four more years, passing away at the age of 86 in 1928. He was the oldest native-born resident of Polk County, Missouri. One of his descendants was Army Col. James E. Coberly, who earned the Legion of Merit and served in the Foreign Service with the State Department.