Over 8,000 African Americans from Missouri – mostly former enslaved – volunteered to fight for freedom in the Union Army in 1862 with the Confiscation Acts. Not until the issuance of the Emancipation Proclamation on January 1, 1863 did the Government approve of the mass mobilization of all-Black units for combat in the infantry, cavalry, and artillery. On May 22, the Bureau of Colored Troops was established by the War Department to handle the recruitment and mobilization of United States Colored Troops units. From that day forth, all African American units were to be designated as such. In total, about 190,000 joined the USCTs, making up for one-tenth of the entire Union Army by 1865.

Below, I have compiled a list of the USCT units that were organized in Missouri during the war. The 8,000 men from Missouri that enlisted in these units joined mostly out of determination to achieve freedom from bondage, not necessarily to fight for country and union. Pay, stability, manhood, and the ability to finally independently care for their wives and children were many of the driving factors that encouraged their enlistment. For former Missouri slaves who fled to free territory in Kansas, where ardent abolitionists welcomed them, the stakes for freedom were even greater. These same troops would deploy into slave territory to fight the men who kept them and their families in bondage. Though many white soldiers and officers doubted whether they could actually fight in combat, these troops repeatedly proved their courage at battles such as Island Mound, Cabin Creek, Honey Springs, and Fort Blakely. Island Mound in Bates County, Missouri was the first known engagement where the Union Army deployed African Americans in combat in October 1862, even before the Emancipation Proclamation. 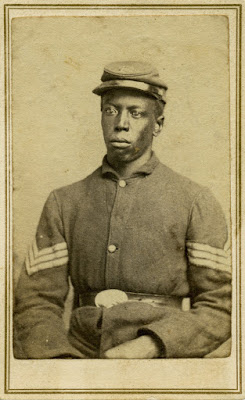 18th United States Colored Infantry – Organized directly into Federal service in February 1864 at St. Louis. Served in Tennessee, Kentucky, and Alabama. They fought in combat at the Battle of Nashville and in the pursuit of Hood’s Army of Tennessee.

56th United States Colored Infantry – Organized in St. Louis on August 1863 as the 3rd Arkansas Volunteer Infantry (African Descent). Served on guard duty throughout Arkansas. Also known for losing 674 men due to a cholera epidemic on their way to muster out at Jefferson Barracks, south of St. Louis.

62nd United States Colored Infantry – Organized as the First Missouri Regiment of Colored Infantry at Benton Barracks in St. Louis. Served throughout Louisiana and Texas. Many men of the 62nd helped fund-raise and establish Lincoln University in Jefferson City, Missouri.

79th United States Colored Infantry – Formed with the First Kansas Colored Infantry (made of many former Missouri slaves) in December 1864. The men of the First Kansas fought at Island Mound, Honey Springs, the Camden Expedition, Poison Springs, and Cabin Creek. One of the first African American officers served in this unit, William Matthews, who had worked as conductor on the Underground Railroad in Leavenworth, Kansas before the war.

83rd United States Colored Infantry – Originally formed as the Second Kansas Colored Infantry, also partially made up of former Missouri slaves. These men fought in combat at Baxter Springs against Quantrill, in the Camden Expedition, and Jenkins’ Ferry.

Stay tuned for more research on the Missouri USCTs. I will be looking into their rosters, stories, and engagements here on the blog. In meantime, check out some of the following resources that reveal more of the forgotten history of USCTs in Missouri and the Trans-Mississippi West. We often learn about African American troops in the Eastern and Western theaters, but rarely west of the Mississippi River.

On National Public Radio’s Daily Picture Show, there was a 2012 article written by Claire O’Neill titled “African-American Faces of the Civil War,” which featured many Missouri USCT troops. The Civil War Virtual Museum also showcased an article on USCT soldiers in the Trans-Mississippi. In 2018, historian Dr. Jonathan Lande of the New York Historical Society gave a talk on desertion in African American units during the war, in which he goes into extensive detail about the larger meaning of sacrifice, freedom, and military service of former slaves. You can watch it in full from CSPAN here. There is still much more we can learn about the war experiences of African American soldiers, especially the ones who lived in the border South, such as Missouri.