One of the most fascinating stories of survival and fortitude from the Civil War comes from Port Gibson, Mississippi in 1863. Irish immigrant, surgeon, and now combat officer, Major James Lawlor Kiernan was severely wounded and was nearly captured in the wet, murky swamps near the Mississippi River, following one of the initial engagements of the Vicksburg Campaign. 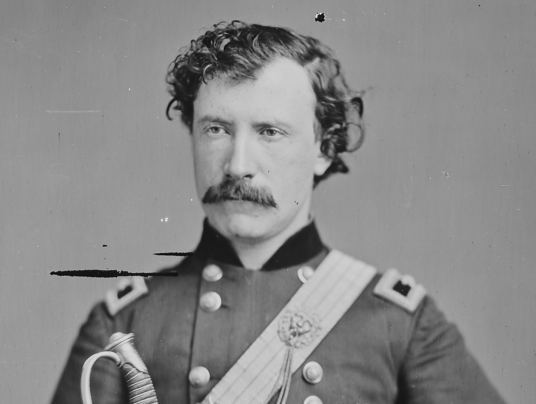 Brigadier General James Lawlor Kieran between 1863 and 1864. Courtesy of the Library of Congress.

The son of a British naval surgeon, Kiernan was born in a small Franciscan Catholic farming village in County Galway, Ireland in 1837. Well-educated and intelligent, he was enrolled at Trinity College in Dublin in 1854, but immigrated to the United States soon after, where he subsequently graduated from New York University’s Academy of Medicine in 1857. Living in the Lower East Side of Manhattan, he and his brother-in-law both practiced medicine and even edited their own weekly medical newspaper named the New York Medical Press until the outbreak of the Civil War in 1861.

His education, Irish heritage, and love for the Union, inspired Kiernan to enlist in the Union Army. Following President Abraham Lincoln’s call for troops after the Rebel attack upon Fort Sumter, the 69th New York State Militia was called for service, recruiting three-month volunteer soldiers.With a medical background. Kiernan was commissioned as the assistant surgeon in the regiment. His knowledge and skill was tested in the first major land battle of the war at Manassas on July 21, 1861. The men of the 69th New York received their baptism of fire on the fields surrounding Manassas Junction, losing 41 men killed, 85 wounded, and 60 prisoners-of-war. Kiernan and the other surgeons were responsible for treating wounds of all kinds and, most of all, saving lives. When the 69th New York returned to Manhattan to muster out, Kiernan went west.[1]

Excerpt from the promotion letter to Department of the West commander Henry Halleck in St. Louis, Missouri from Kiernan. Courtesy of the National Archives.

Just days after joining the 6th Missouri Cavalry, Kiernan served temporarily in Major General John C. Fremont’s staff at Pea Ridge. On the second day of the battle, he was wounded in the right leg from a musket ball. Soon after, he was medically evacuated to Jefferson Barracks’ hospital in St. Louis.  Having a desire to serve in a combat role, Kiernan was appointed maajor in the 6th Missouri Cavalry, now serving in a combat role instead. Soon after, he and the 6th Missouri Cavalry was engaged in the battles of Prairie Grove, Chickasaw Bayou, Arkansas Post, and the Yazoo Pass Expedition. Though his combat leadership skills were tested with this unit throughout late 1862 into 1863, Kiernan’s toughest task would come soon after the Army of the Tennessee crossed the Mississippi River into enemy territory at Bruinsburg, Mississippi on April 30, 1863.[2]

Major General Ulysses Grant’s first objective in his campaign to take Vicksburg was Port Gibson, Mississippi, just 10 miles from their initial crossing point at Bruinsburg. Kiernan’s unit was in Brigadire General Peter Osterhaus’ 9th Division in the XIII Army Corps throughout the campaign. At Port Gibson, Confederate Major General John Bowen’s force guarded the crossroads and town there. Grant ordered the XVII and XIII corps to take this initial objective. A part of the cavalry detachment, Osterhaus ordered the 6th Missouri Cavalry to recapture ambulances in the hands of the enemy. During this expedition, Kiernan was shot off his mount with wounds in his left shoulder and through the lung. As Port Gibson is surrounded by murky swampland, Kiernan was left for dead and captured by the enemy.

Part of the Sixteenth Corps moving through Port Gibson. Courtesy of the Mississippi Department of Archives and History.

Miraculously, he escaped. His lungs filled with blood and unable to use his left arm, Kiernan walked nearly 8 miles in enemy territory to find help. Four days later, Kiernan somehow made it to the Federal supply base at Grand Gulf, Mississippi. For nearly a month, the wounded officer was treated in the U.S. General Hospital there. However, on May 26, 1863, he was forced to resign his combat commission, because of the severity of the wounds. His bravery, though, led to his promotion to brigadier general in August. Encouraged to continue serving, Kiernan was stationed in Louisiana, but soon caught malaria. A combination of persistent infection and malaria, his wounds reopened, forcing him to resign from the Army entirely in February 1864.[3]

After the war, Kiernan served in many capacities throughout the world. At Zhenjiang, China, he worked in an American consular post for a brief period of time. He moved back to New York City to work as a physician in the Pension Bureau until November 26, 1869, when he finally succumbed to his poor health. The Union hero is buried in the Green-Wood Cemetery in Brooklyn, New York.